THE HISTORY OF IBN AL-JATIB

Who was Ibn Al Jatib?

He was the most remarkable figure in the cultural history of the Kingdom of Granada and was a man who played an important role in the politics of his time. He was the last important scholar and scientist in the history of al-Andalus. A poet, biographer, historian, physician, thinker, and writer of a demanding prose, but rich in knowledge and witty comments, all the different themes he wrote about showed what a great man he was.

Born in Loja in 1313, member of a well established family, he had a broad intellectual education he took advantage of and which he developed with his privileged mind.

He entered the court in the times of king Yusuf I as a secretary. There he served under the orders of Ibn al-Yayyab, who preceded him in the post of vizier of the sultans’ court during the first half of the 14th century. Both, together with Ibn Zamrak, who became Ibn al-Jatib’s disciple, decorated the walls of the Alhambra with their verses.

After Ibn al-Yayyab’s death, Ibn al-Jatib became the new vizier, a position which he maintained after the sultan Yusuf I died, under the latter´s son Muhammad V.

Muhammad’s was a difficult reign, and Ibn al-Jatib and the sultan himself had to live a period of exile in Morocco. He made a good use of the opportunity of becoming well-known for his intelligence in the local court. 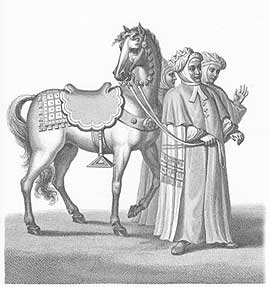 Back in Granada, when Muhammad recovered the power, Ibn al-Jatib’s political career reached its peak. He was all-important in the court of the Alhambra. But, partly due to his ambitions, and partly because of the intrigues of the people around him, he saw himself in a difficult situation. It became so difficult that, pretending an inspection of the western border, he fled across the Straits of Gibraltar to Morocco and never came back.
When he was absent, his foes brought against him charges of every kind, from political to religious ones. Some of his writings were burnt, and, eventually, the court of Granada could have him imprisoned in Morocco. He was killed while being in prison, in 1375.

He wrote over sixty works on historical, religious, philosophic and medical themes. His writings constitute an essential source of information about the nazari kingdom, its men and their history, their characters and habits, and about its geographical features. One of his works contains a valuable first hand testimony of a royal party held in the Palace of the Alhambra, describing dresses, decoration, protocol, food served and numberless curious details. It is a lively, direct vision of the palace´s inner life. As a poet, besides edited works, he left us part of his verses engraved on the walls of that Alhambra he knew so well. One the poems, at the entrance of the Salón de Embajadores, begins as follows:

“I beat the beauties in grace and crown;
down come to me the zodiac signs”

The autobiography of Ibn al-Jatib, written in 1369, is to be found in part of his al-Ihata fi akhbar Gharnata (The Complete Source on the History of Granada), ed. Muhammad Abd Allah Inan (Cairo: Maktabat al-Khanji, 1978). This work has yet to be translated into English.

Ibn Al-Jatib was one of the most renowned erudites of the Hispanic-Muslim world and secretary of Yusuf I, Sultan of Granada, and Muhammad V -the main builders of the modern Alhambra and other emblematic buildings of Granada-, was born in Loja in 1313 in the bosom of a family that came originally from Cordoba. Ibn al Jatib (Lisan ad-Din ibn al-Khatib) held the positions of vizier and double vizier in the court of the Alhambra, at the service of the Nasrid dynasty. He started studying religious matters, grammar, poetry and natural sciences when he was very young and was promoted to become the Sultan’s secretary when he was only 27 years old. Later on he became Yusuf’s vizier, confident and counsellor. Some of his poems decorate the walls of the Alhambra in Granada.